What happens to interstellar objects captured by the solar system?

Now that we know that interstellar objects (ISOs) visit our solar system, scientists are keen to understand them better. How could they be captured? If they’re captured, what happens to them? How many of them might be in our solar system?

One team of researchers is trying to find answers.

We know of two ISOs for certain: “Oumuamua and comet 2I/Borisov. There must’ve been others, probably many of them. But we’ve only recently gained the technology to see them. We’ll likely discover many more of them soon, thanks to new facilities like the Vera C. Rubin Observatory.

In a new paper submitted to The Planetary Science Journal, a trio of researchers have dug into the question of ISOs in our Solar System. The title of the paper is “On the Fate of Interstellar Objects Captured by our Solar System.” The first author is Kevin Napier from the Dept. of Physics at the University of Michigan.

As things stand now, there’s no reliable way to identify individual captured objects. If astronomers could catch an ISO in the process of being captured, that would be great. But the solar system is awfully complex, and that makes identifying ISOs difficult. “Given the complex dynamical architecture of the outer solar system, it is not straightforward to determine whether an object is of interstellar origin,” the authors write. 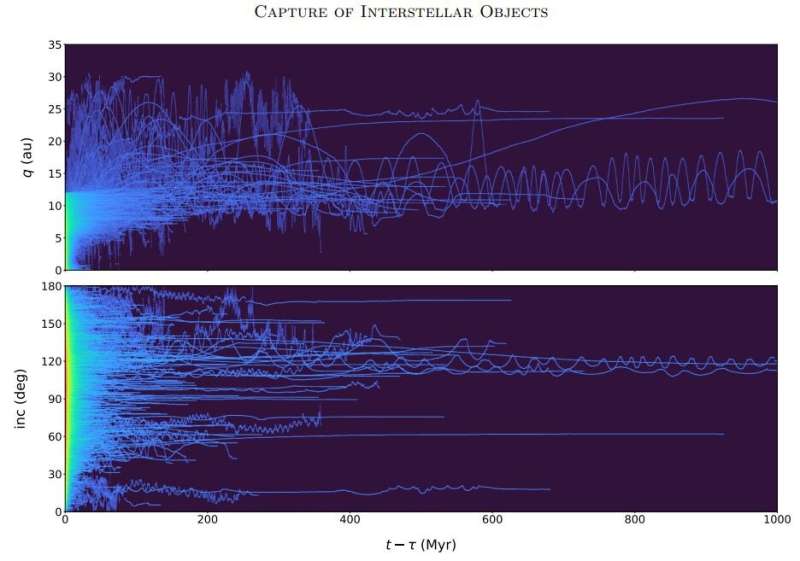 This figure from the study shows some simulation results. Each blue line is an individual ISO. The top represents the osculating pericenter distance in AUs. The bottom shows inclination in degrees. In their simulations, individual objects don’t become distinguishable until after about 100 million years. When a blue line ends, that ISO has left the solar system. Credit: Napier et al 2021

There wasn’t much opportunity to study either “Oumuamua or Borisov. They were identified as ISOs by their hyperbolic excess velocity. That means an object has the right trajectory and a high enough velocity to escape a central object’s gravity. In this case, the central object is, of course, the sun.

So, could ISOs be captured? Quite likely. “The first step in rigorously investigating this question is to calculate a capture cross-section for interstellar objects as a function of hyperbolic excess velocity…” the authors write.

But that’s just the first step, according to the authors. “Although the cross-section provides the first step toward calculating the mass of alien rocks residing in our solar system, we also need to know the lifetime of captured objects.” The researchers calculated the lifetime of the objects using simulations, tried to understand what happens to them over time in our solar system, and then came up with a current inventory of captured ISOs.

You may have missed

Fintech can become a force for renewable energy adoption in Nigeria