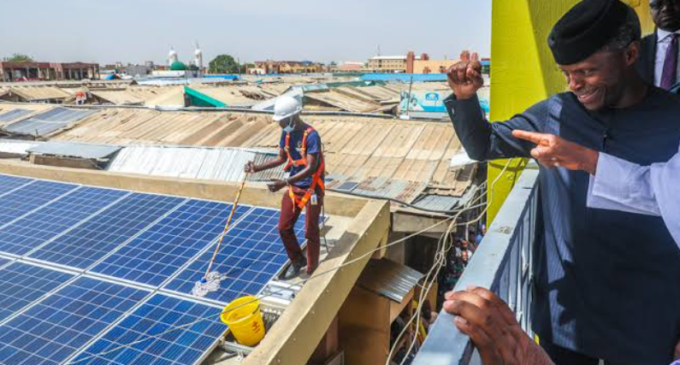 The initiative tagged ‘Solar Power Naija’ targeted at achieving the rollout of 5 million new solar-based connections in communities that are not grid-connected.

It is a component of the economic sustainability plan (ESP) of the federal government.

The Jangefe community in Roni LGA of Jigawa, which has a population of 5,000 will get 1000 solar home systems connections, according to a tweet on Friday by Laolu Akande, senior special assistant to the VP on media and publicity.

NAN reports that the community will pay monthly energy payments until the systems are fully paid for. At this point, there will be a transfer of ownership to each consumer in the community.

The event marks the commencement of 100,000 connections through a commercial partnership between A-Solar, a local developer, the Niger Delta Power Holding Company (NDPHC), and Sterling Bank.

The ministry of power through the Rural Electrification Agency, REA, is the implementing public agency for the Solar Power Naija programme.

The program provides N140 billion in concessionary financing from the Central Bank of Nigeria and commercial banks for off-grid developers.Advertisement

The developers will then roll out mini-grids and solar home systems that will cost from N3,000 per month (and up, depending on system type) to provide electricity to locations all across the country.

Through a World Bank and REA programme called the Nigerian Electrification Programme (NEP), each connection under the Solar Power Naija programme would receive a 20 percent rebate for the developer.

This would in turn allow the rates charged to consumers to be reduced by the same amount.