An artist’s concept of a space-based solar power system beaming to military and remote installations.

Scientists working for the Pentagon have successfully tested a solar panel the size of a pizza box in space, designed as a prototype for a future system to send electricity from space back to any point on Earth.

The panel — known as a Photovoltaic Radiofrequency Antenna Module (PRAM) — was first launched in May 2020, attached to the Pentagon’s X-37B unmanned drone, to harness light from the sun to convert to electricity. The drone is looping Earth every 90 minutes. 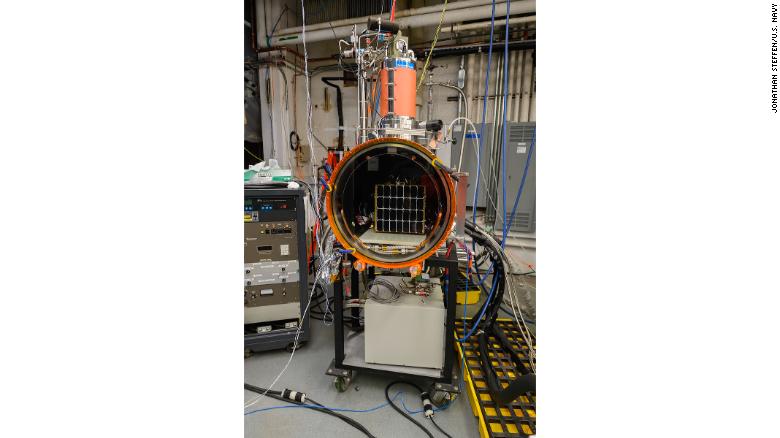 The Photovoltaic Direct Current to Radio Frequency Antenna Module (PRAM) sits inside a thermal vacuum chamber during testing at the US Naval Research Laboratory in Washington, DC.
The panel is designed to make the best use of the light in space, which doesn’t pass through the atmosphere, and so retains the energy of blue waves, making it more powerful than the sunlight that reaches Earth. Blue light diffuses on entry into the atmosphere, which is why the sky appears blue.
“We’re getting a ton of extra sunlight in space just because of that,” said Paul Jaffe, a co-developer of the project.
The latest experiments show that the 12×12-inch panel is capable of producing about 10 watts of energy for transmission, Jaffe told CNN. That’s about enough to power a tablet computer.
But the project envisages an array of dozens of panels and, if scaled up, its success could revolutionize both how power is generated and distributed to remote corners of the globe. It could contribute to the Earth’s largest grid networks, Jaffe said.
“Some visions have space solar matching or exceeding the largest power plants today — multiple gigawatts — so enough for a city,” he said.
The unit has yet to actually send power directly back to Earth, but that technology has already been proven. If the project develops into huge kilometers-wide space solar antennae, it could beam microwaves that would then be converted into fuel-free electricity to any part of the planet at a moment’s notice.
“The unique advantage the solar power satellites have over any other source of power is this global transmissibility,” Jaffe said. “You can send power to Chicago and a fraction of a second later, if you needed, send it instead to London or Brasilia.” 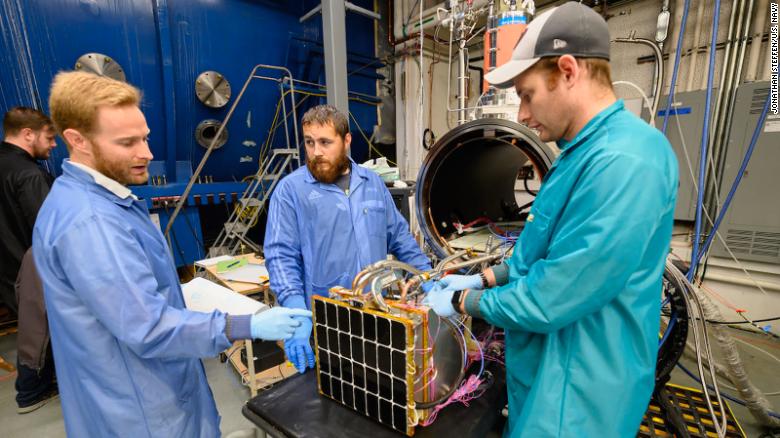 Chris Depuma (left), gives guidance on the PRAM in Washington, DC, on October 10, 2019.
But a key factor to be proven, Jaffe said, is economic viability. “Building hardware for space is expensive,” he said. “And those [costs] are, in the last 10 years, finally starting to come down.”
There are some advantages to building in space. “On Earth, we have this pesky gravity, which is helpful in that it keeps things in place, but is a problem when you start to build very large things, as they have to support their own weight,” Jaffe said.
The mission of the US’ X-37B space plane is shrouded in secrecy, with the PRAM experiment being one of the few details known of its purpose. In January, Jaffe and PRAM co-leader Chris DePuma, released the first results of their experiments in IEEE Journal of Microwaves, which showed “the experiment is working,” Jaffe said.
The project has been funded and developed under the Pentagon, the Operational Energy Capability Improvement Fund (OECIF) and the US Naval Research Laboratory in Washington, DC.

A solution during natural disasters

The temperature at which the PRAM functions is key. Colder electronics are more efficient, Jaffe said, degrading in their ability to generate power as they heat up. The X-37B’s low-earth orbit means it spends about half of each 90-minute loop in darkness, and therefore in the cold.
Any future version of the PRAM might sit in a geosynchronous orbit, which means a loop takes about a day, in which the device would mostly be in sunlight, as it is travelling much further away from Earth.
The experiment used heaters to try to keep the PRAM at a constant, warm temperature to prove how efficient it would be if it were circling 36,000 kilometers from Earth.
It worked. “The next logical step is to scale it up to a larger area that collects more sunlight, that converts more into microwaves,” Jaffe said. 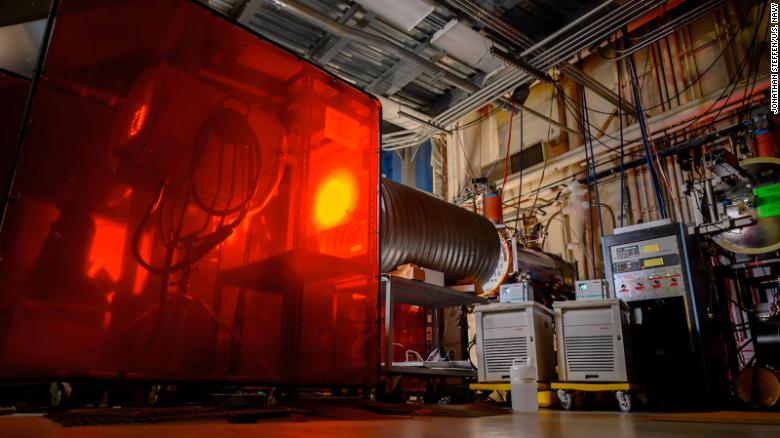 The thermal vacuum chamber allowing the PRAM to be tested in space-like conditions at the lab on October 9, 2019.
Beyond that, scientists will have to test sending the energy back to Earth. The panels would know precisely where to send the microwaves — and not accidentally fire it at the wrong target — using a technique called “retro-directive beam control.” This sends a pilot signal up from the destination antenna on Earth to the panels in space.
The microwave beams would only be transmitted once the pilot signal was received, meaning the receiver was in place below and ready. The microwaves — which would easily be turned into electricity on Earth — could be sent to any point on the planet with a receiver, Jaffe said.
He also allayed any future fear that bad actors could use the technology to create a giant space laser. The size of antenna needed to direct the energy to create a destructive beam would be so huge, it would be noticed in the years or months it took to be assembled. “It would be exceedingly difficult, if not impossible,” he said, to weaponize the solar power from space.
DePuma said the technology, if available today, would have immediate applications in natural disasters when normal infrastructure had collapsed. “My family lives in Texas and they’re all living without power right now in the middle of a cold front because the grid is overloaded,” DePuma said.
“So if you had a system like this, you could redirect some power over there, and then my grandma would have heat in her house again.”

You may have missed

Fintech can become a force for renewable energy adoption in Nigeria