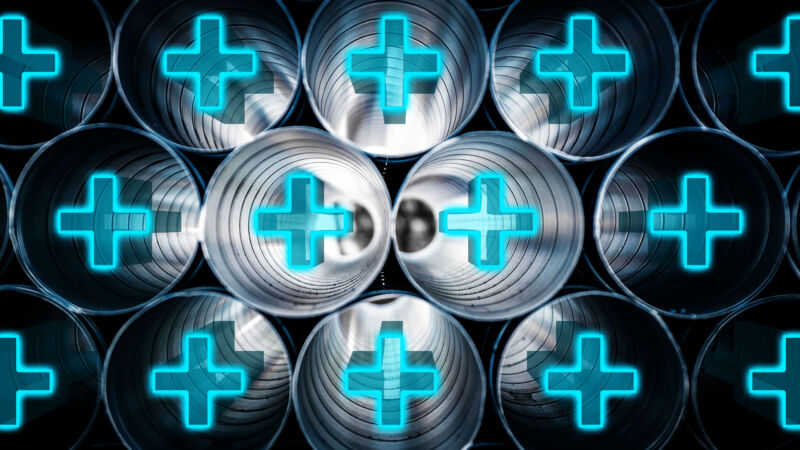 There’s a classic irony with new technology, that adopters are forced to limit themselves to two of the three things everyone wants: fast, cheap, and good. When the tech is batteries, adoption is even more challenging. Cheap and fast (charging) still matter, but “good” can mean different things, such as light weight, low volume, or long life span, depending on your needs. Still, the same sorts of trade-offs are involved. If you want really fast charging, you’ll probably have to give up some capacity.

Those trade-offs keep research into alternate battery chemistries going despite the massive lead lithium has in terms of technology and manufacturing capabilities—there’s still the hope that some other chemistry could provide a big drop in price or a big boost in some measure of performance.

Today, a paper is being published that appears to offer a low price combined with a big boost in several of those measures. The aluminum-sulfur batteries it describes offer low-priced raw materials, competitive size, and more capacity per weight than lithium-ion—with the big plus of fully charging cells in far less than a minute. The one obvious problem it has right now is that it needs to be at 90° C (nearly the boiling point of water) to work.

People have been pondering batteries based on aluminum for a while, drawn by their high theoretical capacity. While each aluminum atom is a bit heavier than lithium, aluminum atoms and ions are physically smaller, as the higher positive charge of the nucleus pulls in the electrons a bit. Plus, aluminum will readily give up as many as three electrons per atom, meaning you can shift lots of charge for each ion involved.

A big problem has been that, chemically, aluminum kind of sucks. Many aluminum compounds are highly insoluble in water, their oxides are extremely stable, and so on—it’s easy for something that should be a minor side-reaction to cripple a battery after a few charge/discharge cycles. So, while work has continued, the high theoretical capacities have often looked like something that would never be realized in practice.

The key to the new work was realizing we’d already solved one of the big problems with making an aluminum metal electrode—we had just done so in a completely different field. Pure metal electrodes offer big boosts in simplicity and volume, since there’s no real chemistry involved, and you don’t need additional materials to stuff the metal ions into. But metal tends to deposit unevenly on battery electrodes, eventually producing spines called dendrites that grow until they damage other battery components or short the cell out entirely. So, figuring out how to deposit metal evenly has been a big hurdle.

A key realization here is that we already know how to deposit aluminum evenly. We do it all the time when we want to electroplate aluminum onto some other metal.

It’s often done using a molten aluminum chloride salt. Within the molten salt, the aluminum and chlorine ions tend to form long chains of alternating atoms. When aluminum is deposited onto a surface, it tends to come out of the center of these chains, and the physical bulk of the rest of the chain makes that easier to do on a flat surface.

Within the molten salt, the aluminum ions can also move quickly from one electrode to the other. The big problem is that aluminum chloride only melts at 192° C. But mixing in a bit of sodium chloride and potassium chloride brought this down to 90° C—below the boiling point of water and compatible with a larger range of additional materials.

With that, the researchers had two-thirds of a battery. One electrode was aluminum metal, and the electrolyte was the liquid aluminum chloride. That leaves a second electrode to be identified. Here, there were lots of examples of storing aluminum as a chemical compound with elements below oxygen on the periodic table, such as sulfur or selenium. For imaging purposes, the team worked with selenium, creating an experimental battery cell and confirming that it was behaving according to expectations.

Imaging of the aluminum showed that, after some charge and discharge cycles, the surface was somewhat blocky, but there were no large or pointy extensions coming out of it that could damage the battery. The reactions at the selenium electrode appeared to start in the molten salt before finishing up on the electrode surface. Overall, the cell showed stable performance over dozens of cycles and the sort of high capacity per weight that aluminum should provide. So, the team moved on to building and testing the cells they were really interested in: aluminum sulfur.

At slow rates of discharge, the aluminum sulfur cells had a charge capacity per weight that was over three times that of lithium-ion batteries. That figure went down as the rate of charge/discharge went up, but performance remained excellent. If the cell was discharged over two hours and charged in just six minutes, it still had a charge capacity per weight that was 25 percent higher than lithium-ion batteries and retained roughly 80 percent of that capacity after 500 cycles—well beyond what you’d see with most lithium chemistries.

If you dropped charging times down to a bit over a minute, the capacity per weight was roughly equal to that of a lithium-ion battery, and more than 80 percent of that capacity was still available after 200 cycles. The battery cell could even tolerate a full charge in under 20 seconds, although capacity per weight was only a bit over half what you would get out of lithium-ion.

There are some notable cautions here. One is that the battery needs to be at about 110° C for this sort of performance. With good insulation, this only requires a small heater to get things molten; after that, the heat generated during charge/discharge cycles should keep things working. And, while insulation may add a bit to the bulk of the battery, you can get away without the cooling hardware some lithium-ion applications require.

The bigger caution is that, with any water contamination of the materials, the battery will start producing hydrogen sulfide, which is both poisonous and highly flammable. So, while the battery can’t catch fire like some lithium-ion options, if its contents come in contact with the environment, there’s a window of time where fire risks are possible before the salt cools down and solidifies.

On the plus side of the trade-offs, the charge per volume will likely be similar to some existing lithium chemistries, and the raw material costs are almost comically low—the researchers calculate under $9 per kilowatt-hour, or about 15 percent of lithium-ion. The chemistry’s also not especially fussy; the researchers picked up aluminum foil from the grocery store and found that it worked just fine as an electrode. That hints at the possibility that mass production may still be compatible with the high performance of these handmade cells.

Finally, the team notes that the simplicity of the chemistry should boost the recyclability of the batteries at end-of-life.

None of this is to say that this technology can let us punch a one-way ticket to battery nirvana. While a company has already been formed to commercialize the tech, there’s already a huge infrastructure dedicated to lithium-ion battery production, and the tech there is constantly improving, too. But if supplies of the raw materials for mainstream batteries ever become constrained, it could be very useful to have a tech based entirely on abundant chemicals waiting in the wings.